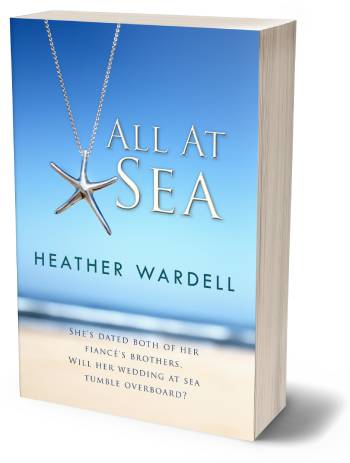 Melissa and Owen met on New Years’ Eve and he proposed on Valentine’s Day. Now it’s March, and they’re about to set sail on a two-week Caribbean cruise – and get married on the last day at sea. Though their relationship’s moving fast, Melissa’s wanted to be married for years and she knows the smart stable Owen is a great catch so she’s sure they’ll be fine.

At least, she’s sure until she meets his brothers on the cruise and discovers she’s dated both of them: Austin, the fun-loving flirt whose kisses still haunt her dreams, and Nicholas, the sweet horror movie fan whose lack of ambition upset her in ways she still doesn’t understand.

Melissa expected to spend tons of time onboard with her fiancé, but he instead spends nearly his every waking moment in the casino displaying a previously unseen love of gambling. This surprise, and the time she spends with Nicholas and with Austin, makes her question everything she thought she wanted.

Her relationship with Owen was just fine before, but suddenly ‘just fine’ doesn’t seem good enough to keep a marriage alive for a lifetime. Melissa has two weeks to decide: stay with Owen or jump ship.

“And of course, the romance elements were perfect, and was really the part that kept me turning pages. Obviously I don’t want to give too much away, but Melissa has some big decisions to make and I recommend picking up All At Sea to find out where she ends up.”
(Flights of Fantasy)

“I completely love the book and I will definitely recommend it further. The cover page and the title perfectly suit the storyline, ensuring the appeal factor.”
(!Shita)

“I was so invested in Melissa’s story and was so worried about how things would turn out. Would she go through with the wedding? Would she be true to herself? It actually felt like I was going through this right along with her. That is how emotionally involved I was.”
(Books Etc.)