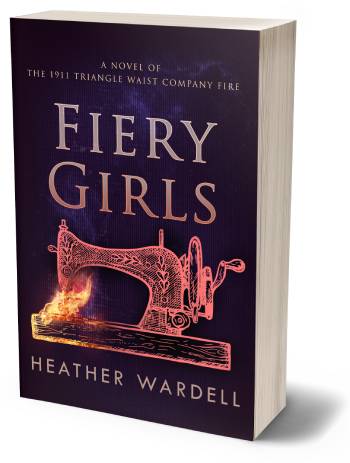 Two young immigrant women. One historic strike. And the fire that changed America.

In 1909, shy sixteen-year-old Rosie Lehrer is sent to New York City to earn money for her family’s emigration from Russia. She will, but she also longs to make her mark on the world before her parents arrive and marry her to a suitable Jewish man. Could she somehow become one of the passionate and articulate “fiery girls” of her garment workers’ union?

Maria Cirrito, spoiled and confident at sixteen, lands at Ellis Island a few weeks later. She’s supposed to spend four years earning American wages then return home to Italy with her new-found wealth to make her family’s lives better. But the boy she loves has promised, with only a little coaxing, to follow her to America and marry her. So she plans to stay forever. With him.

Rosie and Maria meet and become friends during the “Uprising of the 20,000” garment workers’ strike, and they’re working together at the Triangle Waist Company on March 25, 1911 when a discarded cigarette sets the factory ablaze. 146 people die that day, and even those who survive will be changed forever.

Carefully researched and full of historic detail, “Fiery Girls” is a novel of hope: for a better life, for turning tragedy into progress, and for becoming who you’re meant to be.

“While there’s plenty of grimness here, there’s also a lot of grit in the shape of its two memorable heroines, who are worthy of that description in all senses of the word.”
Historical Novel Society

“…a moving feminist story of the powerless fighting the powerful, of young immigrant women who once made the majority of clothing for women in America in NYC’s garment district”
Enchanted Prose

“I had heard of the Triangle Waist Factory fire and have visited Ellis Island, but Wardell brought them to vivid life through the characters’ experiences. It was clear that she did extensive research, but the details were incorporated into the story so well that I felt immersed into Rosie’s and Maria’s New York City rather than looking back over a century later.”
(Goodreads reviewer ‘Becky’)

“Reading the entire book made me feel so empowered. These women characters (Rosie and Maria) from whose POVs the story is being told, are amazingly represented. Both characters shine throughout the read inspite of the way they were mistreated and under worse circumstances. This book just made into my best reads of 2021!”
(Goodreads reviewer ‘Reading_ Tam_ Ishly’)