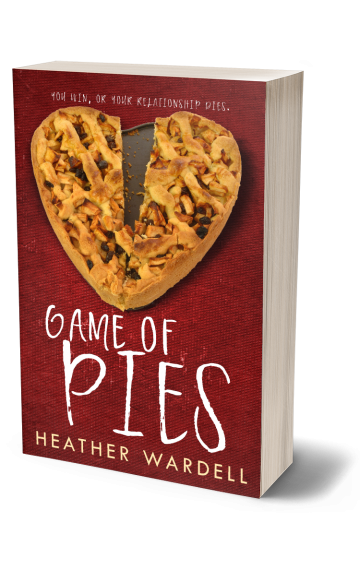 “It’s the Game of Pies: You win or your relationship dies.”

Thirty-somethings Brittany and Kyle have only been together four months, but she knows he’s the one. Hosting Thanksgiving dinner at their Toronto apartment, with the food catered since neither of them are good cooks, will be a perfect way for their relatives to meet and become one big happy family.

Marilyn and Virginia have hated each other for nearly sixty years, since Virginia got herself pregnant by Marilyn’s boyfriend then married him. Both too stubborn to leave their small Ontario town and let the other one win, their feud rages on whenever they encounter each other and particularly at the town’s annual pie-making contest, which only they enter because nobody else dares to get caught in their crossfire.

When the relatives arrive on Thanksgiving, the truth comes out: Marilyn is Brittany’s grandmother, and Virginia is Kyle’s. And for once Marilyn and Virginia agree on something: no relation of that horrible woman is good enough for my grandchild.

With only two months to learn to bake a better pie than women who’ve been at it for decades, can Brittany and Kyle win the “Game of Pies” and save their relationship?

“As a writer myself, I’m bowled over by Wardell’s prodigious output. Indie writers gain a following by pumping out books like a machine, but she never sacrifices plot or character development for speed.”
(Jami Deise, Chick Lit Central)

“I have become a fan of Heather Wardell and her books are great escapes from some of the hard and intense reading that is happening. I like to curl up with her books on a quiet afternoon and just escape into the story.”
(Kritters Ramblings)

“There were twists and surprises, the characters were nerve wrecking sometimes and there were laughs. Go read it and pick up her other books while you are at it.”
(Buy_the_book)