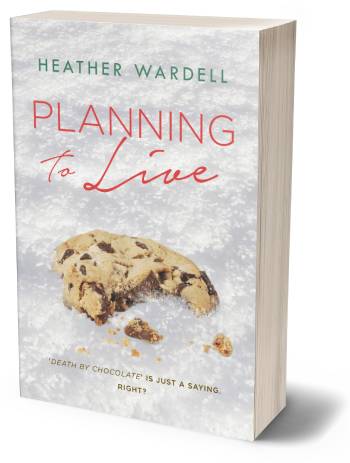 Thirty-something Rhiannon is an obsessive planner and goal-setter, but somehow nothing she achieves ever seems good enough to her. Determined to lose forty pounds for her best friend’s August wedding, Rhiannon flees her parents’ house in a Christmas-day blizzard to avoid the temptation of all her favorite foods, but her car skids off the deserted road into a tree.

Unable to escape the car, with her leg trapped and bleeding and her cell phone out of reach, Rhiannon is at first certain she’ll be rescued and writes notes to her friends and family to pass the time. As the weather cools and her condition deteriorates, though, she recognizes the possibility that her life might be over. Interspersed with increasingly desperate escape attempts, her letters become deeper and more heart-felt as she comes to see what really matters in life.

She’s spent her whole life planning but hasn’t ever really lived. Will she get the chance to change that?

“I think it is absolutely IMPERATIVE that EVERY woman I know, read this book immediately. If it doesn’t change your life it will at least leave one hell of a dent.”
(Kindle Obsessed)

“This book touched me right down to my soul. It has a powerful message and is written in a format that really makes you think.”
(Lisa’s World of Books)

“An incredible look at what’s really important in life, Planning to Live combines a powerful message into a negative series of events without coming off as melodramatic or unrealistic. The book is filled with realistic dialog, fluid transitions between flashbacks and present day, and is very well written. Wardell’s novel is one to keep nearby at all times, for the moments when we all feel our lives have become stagnant.”
(Jenn L. with Luxury Reading)