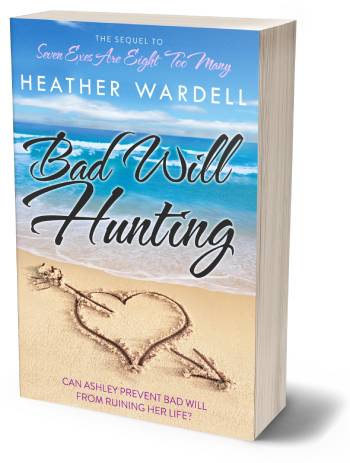 During her time on “Ragged Royalty”, Ashley developed a reputation as the show’s scowling shrew. Clever editing, no doubt, but she still hates it. Now that her stint on the show is complete, she’s determined to get the revenge she deserves on the producers who made her look so awful. Without it she can’t move forward and decide what comes next for her. She knows what doesn’t, though–ever seeing MC or Kent or any of the other contestants again. She hates all of them and they hate her too. Who could like “Angry Ashley”?

When she meets sexy attorney Will on the flight home, she believes he can help her get everything she needs. Until he double-crosses her. Now she needs revenge on him too.

After reluctantly enlisting fellow contestant Sam’s much-needed help in her “Bad Will Hunting” mission, Ashley turns up a ton of dead ends but also some exciting life-changing possibilities. But she can’t get over her need to get one over on Will, and on everyone else who’s wronged her.

With so much “bad will” in her way, can Ashley ever find true happiness?

The sequel to “Seven Exes are Eight Too Many”!

“when [Ashley] was angry and hell-bent on revenge, it was hard for me to actually like her, but in the end, I ended up loving her just as much as I loved MC in Seven Exes are Eight Too Many.”
(eBook Addict)

“Wardell’s book is well-written and structured, and as I got to know Ashley more, I found myself feeling sorry for her. But the question of whether a protagonist needs to be likeable – especially in first person women’s fiction – is one worth debating, and this is a book that’s worth reading.”
(Chick Lit Central)

“Ashley’s rage is all-consuming, coiled inside of her like a poisonous snake waiting to strike. It affects every area of her life, and all of that negative energy builds on itself until finally Ashley reaches a turning point. That turning point, the crux of the story, embodied everything I love about Heather’s writing.”
(I’d So Rather Be Reading)