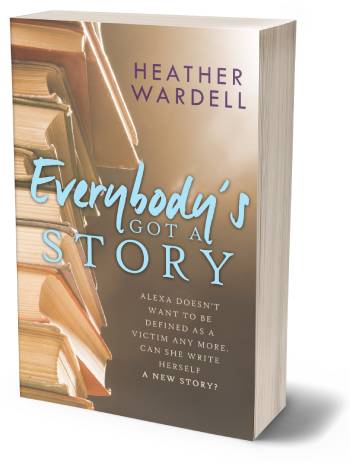 Both personally and professionally, Alexa knows all too well the power of words. Two years after her boyfriend Christophe’s vicious attack, she’s still trying to see herself as more than simply ‘his victim’, still trying to figure out her own story.

After his trial, she moves from New York City to Toronto in an attempt to start over, but his words cling to her and even in a new country she can’t see how to move into relationships with the new people in her life while hiding the secret of Christophe’s worst offense.

She can’t hide that secret from her coworker Jake, though, because the news buff has recognized her from the coverage of the assault and trial and knows every word she can’t bring herself to say about her ordeal.

With Jake’s help, can Alexa reclaim her story and her life?

“What I thought was going to be a run-of-the-mill type of inspirational, overcoming type of story turned out to be so much more. This was my first time reading a book in this series or by the author, something I am going to rectify quickly.”
(Confessions of a Word Addict)

“Everybody’s Got a Story is such a gripping read. I didn’t really know what to expect, but in the end, I was hooked. Alexa’s story is graphic, but written in a way that it’s paired with lighthearted moments to help break up the tension.”
(Roundtable Reviews)

“All in all it is a compelling and truly fine piece of romance writing and one that is thoughtfully put together and which brings all its attendant parts together to make a splendid whole.”
(Judith at Book Binge)