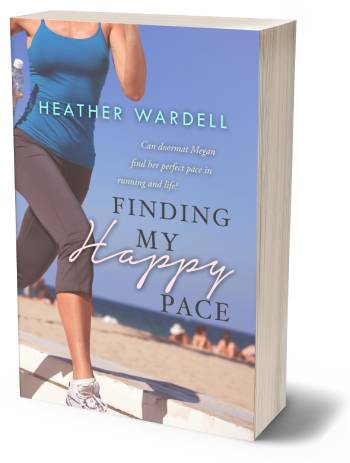 If thirty-year-old Megan were any more of a doormat, she’d have footprints on her back. She helps anyone and everyone, no matter the cost to herself, and she’s always been that way. Even the thought of withholding her assistance makes her feel sick. Worse, it makes her feel like she’s a bad person, selfish and unkind.

She takes up running purely to avoid gaining weight, but as she trains with her cute but heartbroken coach Andrew she becomes more able to do things she’d never thought she could, both physically and emotionally.

The day before she runs her first marathon, though, her best friend’s demands result in the biggest challenge yet to her developing assertiveness and Megan must decide: cave in as she always has before or stick to her new-found ‘happy pace’ in running and life.

“I smiled through most of the novel, and was rooting for Megan the entire time. In my opinion, this is another awesome novel from Heather!”
(Lost in Literature)

“Sometimes it got difficult to read about Megan constantly being treated like nothing by her friend Amanda (and James -ugh- what a character!) and it could almost cross the line into her being too whiny. But this is where Wardell’s superb writing skills come in, and she helps readers understand why Megan lets herself be treated bad. I highly enjoyed watching Megan grow as a person, and this is another 5 star referral for Heather Wardell from me!”
(Chick Lit Plus)

“I found I could relate to Megan really well as, like me, she found it hard to say no to people and constantly tried to make everyone happy (except herself!). The whole running idea seemed to be a real learning curve for her as she began to change her way of life to suit herself instead of everyone else. I found this really inspiring as it made me think of changes I could make in my own life.”
(Me, My Books, and I)