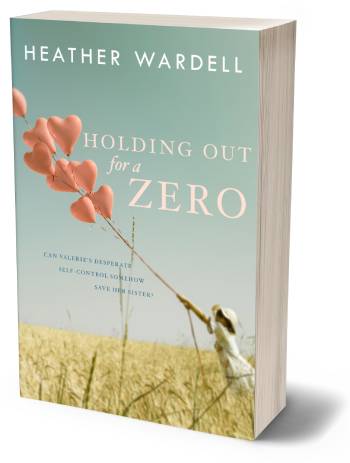 “I’m doing the right thing, not feeding myself. It’s the only thing I can do, so I will do it. Gloria can somehow have the energy I don’t take in, and it will help her stay alive.”

Twenty years ago, fourteen-year-old Valerie rushed off for lunch with her boyfriend instead of properly putting away a packet of balloons, and her little brother choked to death on his third birthday. In response, Valerie locked down every aspect of her life so she could never lose control like that again, and she’s still doing that today.

So when her sister Gloria is found comatose after an apparently random attack, Valerie is desperate to do something, anything, to save her only remaining sibling. But as a financial controller for a “nothing bigger than a size six” fashion designer, she has no medical background and no idea of how to help. But she has to find a way.

Since Gloria has always wanted to be a size zero, Valerie hits on food as the answer: by eating less, she will lose the weight Gloria now can’t and somehow save her sister that way. But when “eating less” turns into a frantic starvation diet to reach size zero before Gloria dies, will Valerie’s self control save her sister or destroy her own life?

“a riveting book about childhood trauma and the harmful neuroses that can arise from guilt.”
Publishers Weekly

“I tend to love this author’s works for their realism, and this was no exception. Valerie may not have been the nicest person, but she was very real and very believable. Her internal thoughts made sense, and it was easy to understand her actions. It doesn’t matter than they got so unbelievably self-destructive because that’s the way reality works.”
(“Workaday Reads”)

“WOW! This book was a moving tale of everything that Valerie did to escape her battle with survivor’s guilt. What a different (and heavy) topic to touch on, which left me wanting to keep reading.”
(“Book Lover in Florida”)