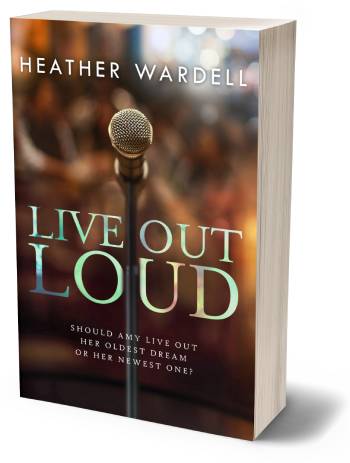 Amy’s a hobbyist songwriter with big dreams, but not the usual ‘making it as a musician’ kind. No, Amy wants to honor her late best friend by finally starting the support center for teenage girls they’d dreamed of when they were just girls themselves. She doesn’t know where to start, but when one of her songs becomes an overnight internet sensation she sees a quick path to the money she’ll need to make the center a reality.

As white-hot pop sensation Misty Will, Amy finds a whole new world opening to her and realizes she loves being on stage holding an audience spellbound. She also loves how her young fans look up to her and draw strength from her songs, but of course they don’t know the awful thing she did after her friend died and how badly she could have used a support center herself. She knows, though, and also knows that she simply has to leave her new pop princess identity behind and become Amy the center director as she’s dreamed of for eight years.

“Once again Heather Wardell gives us a winner. Wardell has a way of creating characters and situations to which her readers can relate wholeheartedly.”
(Tiffany of Tiffany’s Bookshelf)

“I recommend it for light reading, music industry lovers and those who seek a dream. Amy’s determination in reaching her ultimate goal and working for her dream is inspiring.”
(Literary Marie)

“My favorite part had to be the underlying message that clearly comes across: live your dreams with no apologies. All too often we feel pressured to do something with our lives that will make others happy, but it’s easy to lose sight of what will make us truly happy.”
(The Book Chick)